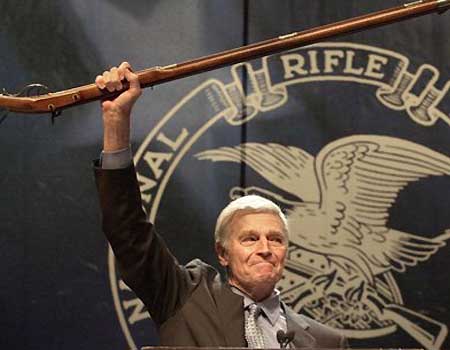 Description: "Were it not for your active involvement," Florida Gov. Jeb Bush told him, "it's safe to say my brother may not have been president of the United States." It was in the 2000 campaign that the NRA went after Democratic candidate Al Gore with a vengeance built up over years of confrontation with the Clinton administration and its "jack-booted government thugs," as others put it. Heston may have had too regal a bearing to use such incendiary words. But in attacking a Democrat who favored mandatory photo ID licenses for future handgun buyers, Heston held little else back. Heston held a musket dramatically above his head and dared Gore from afar to pry it "from my cold dead hands."