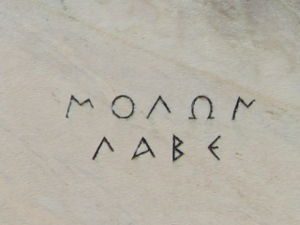 Description: Molon Labe was the defiant response of King Leonidas I of Sparta to Xerxes I of Persia at the onset of the Battle of Thermopylae (480 BC). Xerxes, whose forces vastly outnumbered the Spartans and their allies, offered to spare the lives of Leonidas and his few thousand warriors if they would only surrender and lay down their weapons. He said "Come and get them!" Instead, the Spartans held Thermopylae for three days and, although they were ultimately annihilated, they inflicted serious damage upon the Persian army, and most importantly delayed its progress to Athens, providing sufficient time for the city's evacuation to Salamis Island. Though a clear defeat, Thermopylae served as a moral victory and inspired the troops at the Battle of Salamis and the Battle of Plataea.