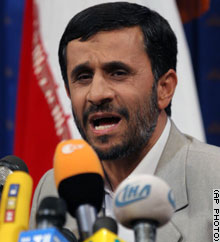 Description: The leader of Iran, Amadinajab, was elected via a flawed process wherein the Mullas decide who can be on the ballot. Popular reform candidates are routinely barred from being elected by the masses. Despite the anti US rhetoric of Iran's leaders, a vast majority of the population is believed to have a positive attitude toward America. Uploaded: 2/9/2008 by Sam Griffin